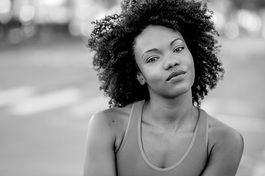 “Tell me no but I’m just gonna do what I want anyway!” – A defiant proclamation at age six has been Kellye’s mantra for life ever since.  Kellye Janel, also known as Kellye J is a multi-ethnic actress, radio personality and performance artist born and raised in Harlem NY.  She began performing at the age of six with the Kumba Kids, a traveling theatre troupe performed poetry, short plays and folktales of many acclaimed African American artists. She also studied various forms of dance with the American Ballet Theatre, Ruth Williams Dance Studio and Perry Dance Studio.  By the age of seventeen Kellye had graced the well-known stages of the Metropolitan Opera House, Lincoln Center, and Aaron Davis Hall.

During her college years, Kellye earned her BFA in Film Production from Brooklyn College where she also minored in Theatre.  Since graduating Kellye has worked on productions for numerous Viacom brands and for various television networks including NBC Universal.   Kellye has also continued her acting studies at schools such as Atlantic Acting School and Black Nexxus.

As an actress Kellye worked with Spike Lee’s protégé, Michael “Boogie” Pinckney on Shotgun Poet, Troy Shawn Welcome and The Club.  Kellye has appeared in award winning web series such as Tony Clomax’s Twelve Steps to Recovery and Boyz, Girlz and Sparkz. She won Best Lead Actress at LAWebFest for her portrayal of Trini in Boyz, Girlz, and Sparks. In the same year Kellye played the title character in Jackie, a short film produced by B Good Productions which has since earned many accolades in the festival circuit.

A true lover of the arts, Kellye continues to act in film, television, commercials and theatre.  She has also expanded to radio.  Working with Wu World Radio, a station affiliated with the infamous Rap Group Wu Tang Clan, she created the first music video show geared towards mobile devices.  Kellye has also reclaimed her love of dance and can be seen performing her pole dance routines in select performance art venues.  Additionally, Kellye hosts various pole events and competitions such as the renown United States Pole Dance Federation 2017 Pro Competition.

Look for me under Lifestyle Women - Kellye J